Clean, orderly, and civilized like Switzerland. Vast, colorful, and lively like New York City. Filled with history, traditions, and great food like Italy. The perfect blend, Tokyo is intense. Each district or ‘special ward’ has so much to offer one would need to spend weeks in each one in order to experience it all. Tokyo is not just another ‘cool’ city; it is the city, and the most interesting, intriguing and stupefying I have ever visited in my life, not to mention my favorite. 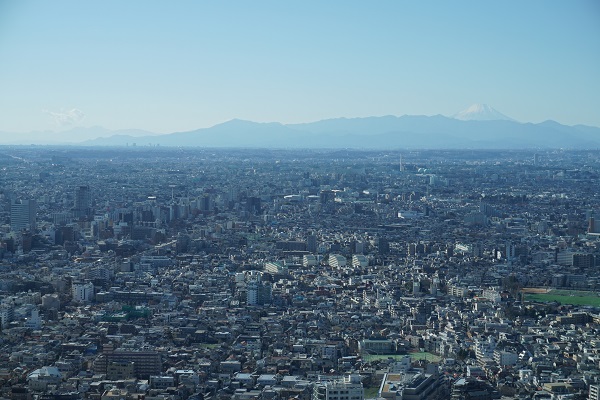 View of Tokyo with Mount Fuji in the back

Walking its streets for the first time, we were struck by the complete lack of garbage. Were we not in one of the biggest metropolis in the world? Where’s the usual trash lying around big cities? No cigarette stubs (we later learned that smoking on the streets is banned), no paper tissues, no plastic bags, no cans, no paper nor empty bottles of any kind; can millions of people keep their city clean? Yes, Tokyo is basically litter free. What’s most surprising is that dustbins are nowhere to be found, or very very hard to find and rarely public. Considering the vastness of the city, this is a major plus. A clean city is a healthy city. 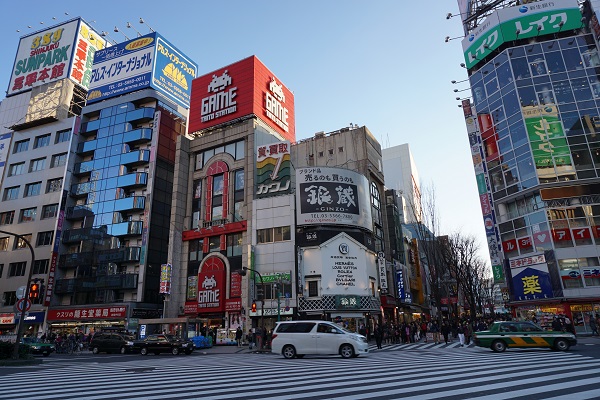 Then there’s also the silence. No driver horns, no pedestrian talks on the phone, no one yells or makes noise especially on trains or on the subway. How delightful! There’s nothing more obnoxious, at least to me, than a person sitting next to you yaking on the phone or to someone else only to hear themselves talk. Tokyo (well, I dare say all of Japan) is silent and this something I was always grateful for.

And it’s so colorful and high tech; neon lights, game stores, slot machine shops. If you’ve been to Times Square in the Big Apple and thought it was the coolest place ever, well may be you haven’t been to Tokyo yet. Here, we found many ‘Times Squares’ that constantly reminded us, we were in the country with the most advanced technology in the world. 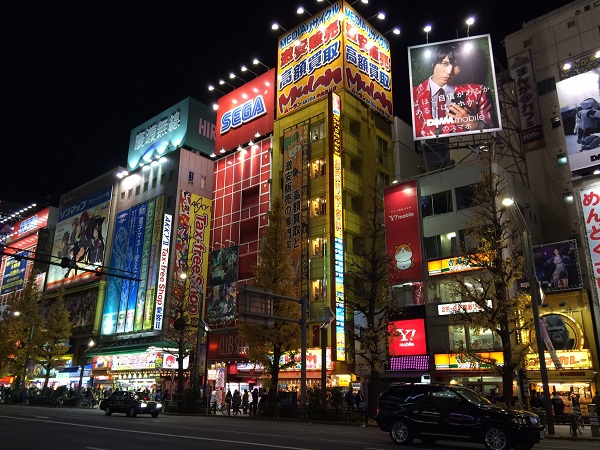 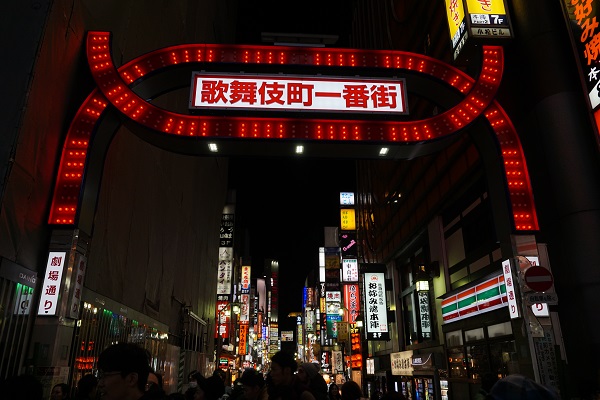 And if you’re a techie,  like my husband is, well there’s a neighborhood just for you: Akihabara, the Electric town. Its name says it all. 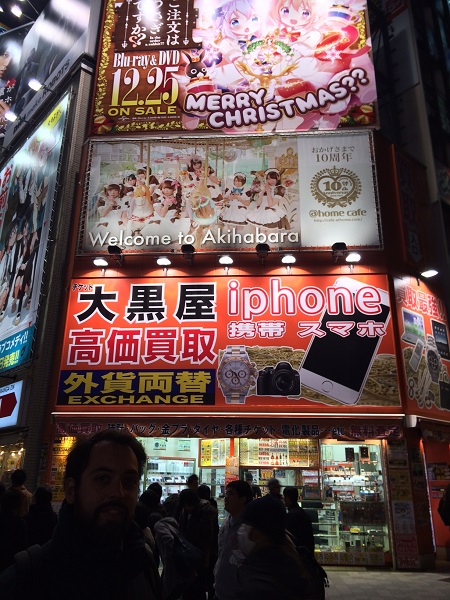 Besides all the imaginable and unimaginable gadgets and games that can be found here in some of the coolest stores in Tokyo, like Yodobashi Camera or Super Potato (for Nintendo fans like me), a  visit to one of the famous maid cafés proves that coffee and dessert can be part of a truly weird experience. This is what happened to us when we went to ‘@home cafe’, one with the most positive reviews. 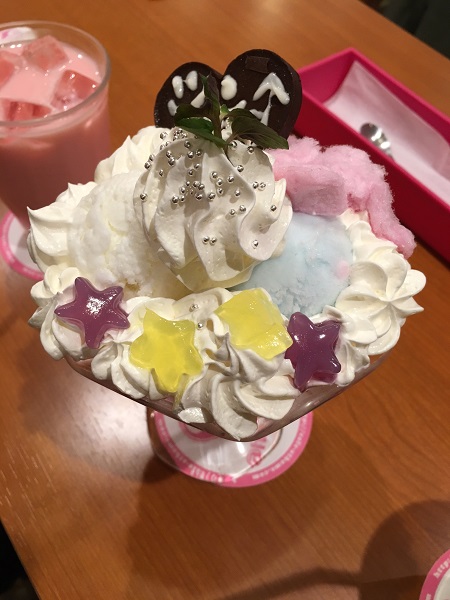 Ice cream cup; our only picture as taking photos inside the coffee shop is forbidden (as well as touching your waitress or asking her for her real name or phone number).

Once we entered the coffee shop all we saw were pastel colors and white (the furnishings and even dessert!); then, our assigned waitress dressed in a maid custom (as well as her coworkers), who faked a ‘baby’ voice and smiled and laughed persistenly, treated us as though we were a little kid or worse, her lover (for instance, she’d make us say things and sing what she sang and even flirt a little). Is this supposed to be sexy? Apparently it is for Japanese men. Well, it all made us feel…embarrassed. It’s part of the experience of this neighborhood, but definitely not a memorable one that we’d want to repeat again. 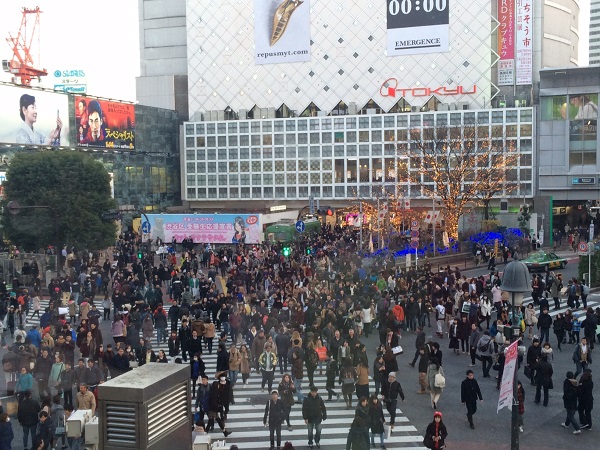 Shibuya crossing taken from Starbucks second floor, where you can find the best view

Instead what we were never tired of doing was crossing the streets of Shibuya. The famous Shibuya crossing is something not to miss while in this magnificent city. The busiest in Japan and probably in the world, this crossing shows the large amount of people that walk these streets daily. Getting here is quite easy, as it is right outside Shibuya Station also famous for Hachiko, an Akita dog that waited for his owner to return for over nine years (not knowing the owner had died). 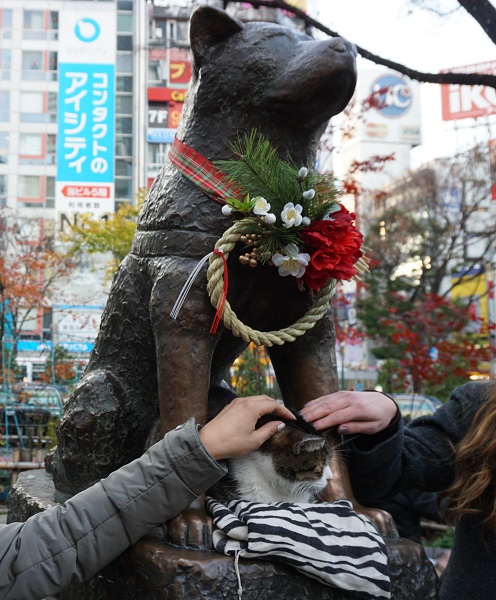 Similar to Shibuya, the Shinjuku district is probably the liveliest in Tokyo. This is where the Metropolitan Government Building is located as well as all other skyscrapers in the city. What is most interesting about this neighborhood is that besides the thousands and thousands of interesting shops and restaurants, we were able to relax at Yoyogi Park which is immense and peaceful, and where we visited Meiji Shrine. 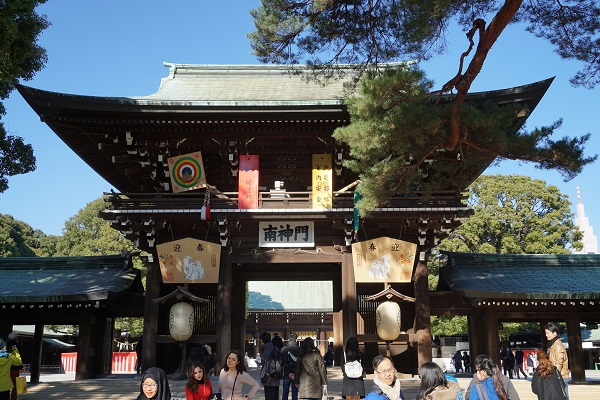 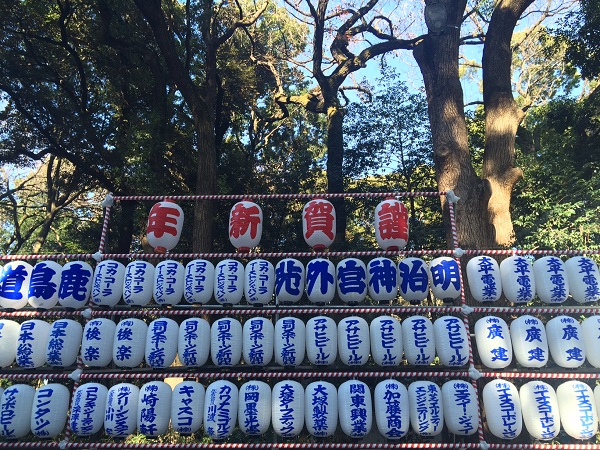 Strolling around the park, we came across a few paths where all we heard was the wind and the chirping of birds. It made us feel as though we were in a forest. 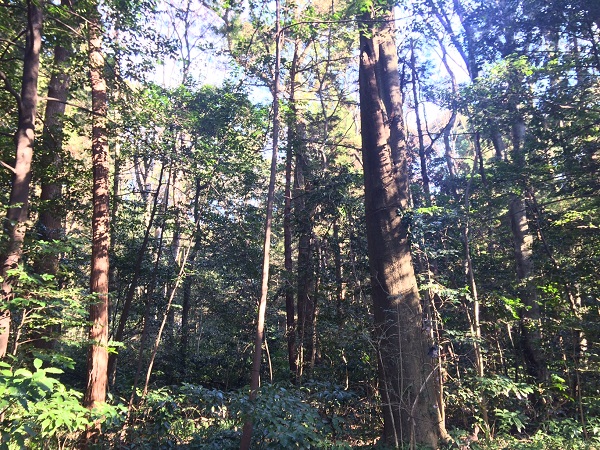 Then after leaving the park we were lucky enough to walk by chance into Golden Gai, an area where we found many many tiny restaurants and bars, tiny as in no more than 10 people could eat together at once. There were bars that could only host two or three people! Here streets are more like corridors and the smell of food invades your nostrils. What a characteristic place! 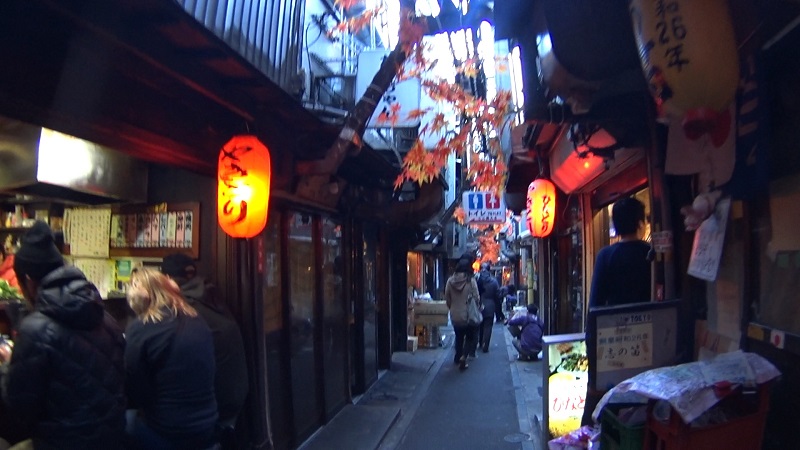 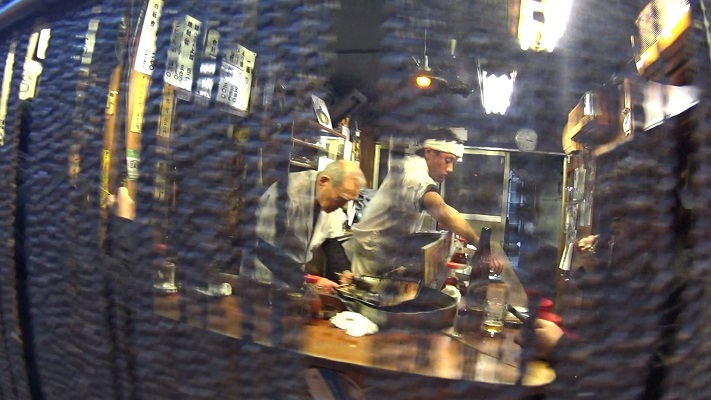 As if our visit hadn’t been exciting enough, Asakusa, especially around New Year’s, proved to be the most special of all districts. This, particularly due to the atmosphere and the incalculable number of people in this area. 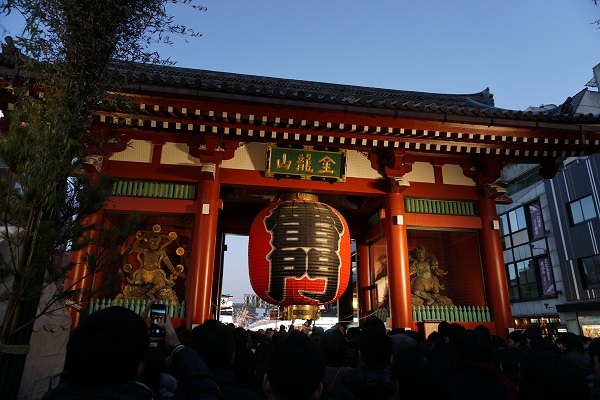 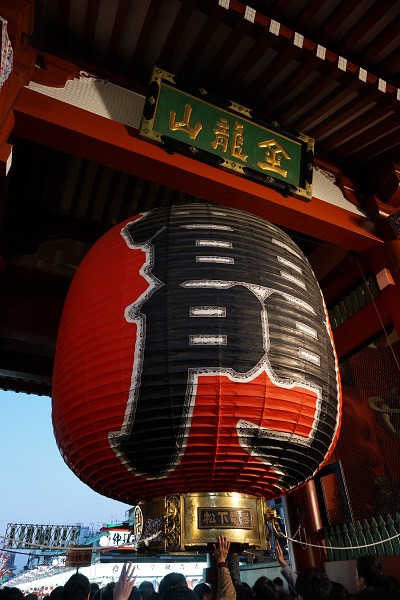 Nakamise Dori, the street that leads to the Temple has many souvenir shops where one can find from t-shirts to chopsticks to lanterns to anything at all. And at this time of year, the street is packed as thousands of people visit the Temple (located at the end of the street) to wish for good luck for the New Year. 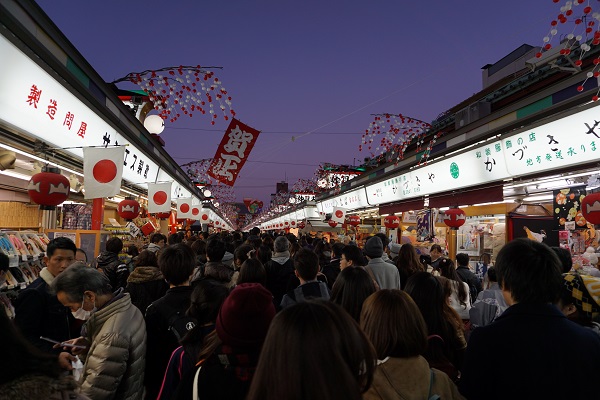 Here we found police officers directing pedestrian traffic: it was unbelievable! All streets that lead to Nakamise Dori were closed, so the only way to access the street was through Kaminarimon gate. There were so many people that we felt we were flying instead of walking; there was no need to move our feet, we were literally dragged by the crowd. There was no chaos though, no pushing, no pulling, no fighting, no rush. It was a river of people that flowed smoothly and steadily, and we couldn’t believe it. Then, at some point, the temple appeared in front of us. 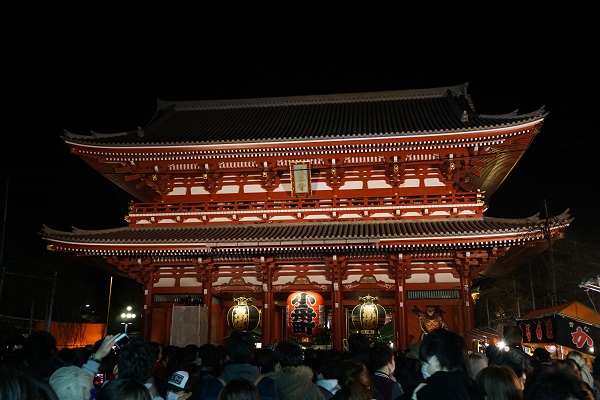 And here too, we had to wait for police to signal us to proceed as they only let small groups of people approach it one at a time. Magnificent! Whispers, incense in the air, and the sound of coin throwing inside a delimited area in front of the temple. The Japanese people do this before praying for a good year. 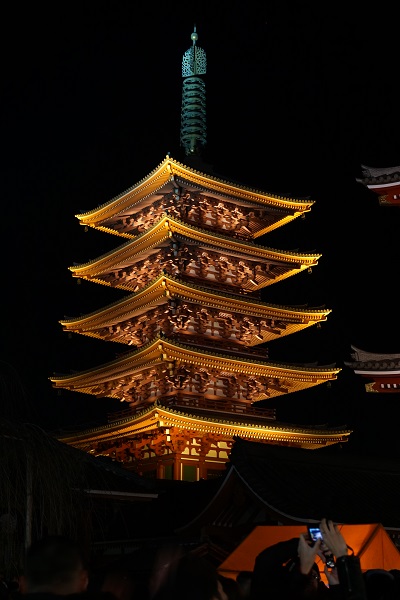 Inside the temple, we saw buddhists wearing traditional robes and praying (or singing). The sound they made was music to our ears and it made the whole experience magical without a doubt.

This is the city of cities, and here a normal ‘something’ is taken to the next level. For instance, a fish market: Tsukiji, the biggest and busiest in the world. It is most famous for its tuna auctions that take place around 5 am in the morning, and to which tourists are allowed entrance (but only on specific days and only to 120 people). We were staying at a hotel nearby, but unfortunately the market was closed on the days we were there. 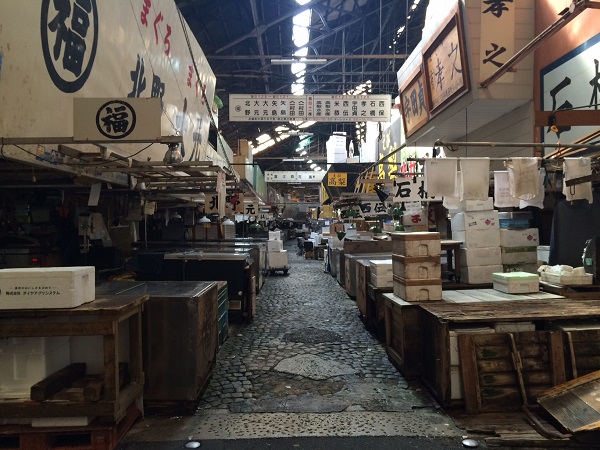 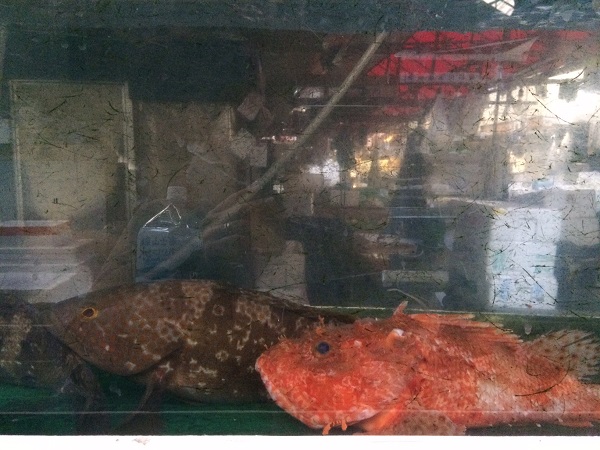 Even though we visited the market when emptied, its immensity was nonetheless striking. Right outside the market, many bars and restaurants offer great meals with fresh fish. It was early in the morning and hadn’t had breakfast, so why not? We had sushi and it was amazing! 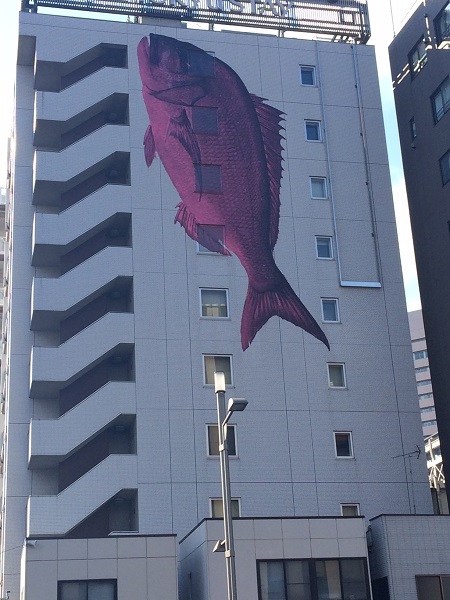 Near this district is Chuo City, most famous for Ginza: the luxury neighborhood. Here we were struck by the huge malls and amazing shop windows of all the famous brands: Gucci, Dior, Armani, etc. Living in Milan, the fashion capital, we didn’t think it was extraordinary. Still, this area is very pretty and it’s the place for serious shopping. 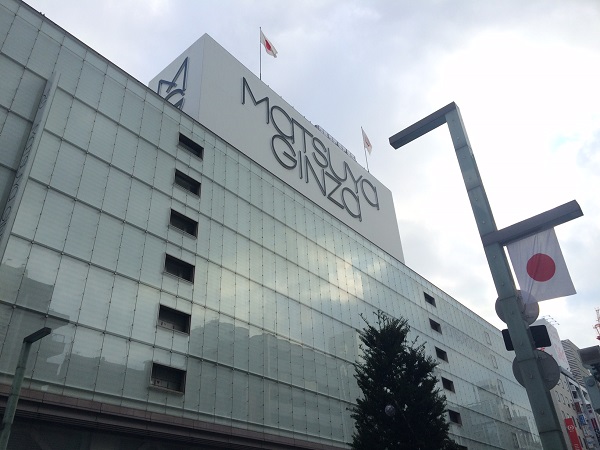 Lastly, on our final day in Tokyo, we learned the Emperor of Japan makes one of the very few public appearances throughout the year, and we decided we couldn’t miss this special occasion.

Again, order and silence were predominant during this event. The Japanese people silently walked towards the Palace, each one carrying a Japanese flag. We too had a flag that we brought home with us as a souvenir. 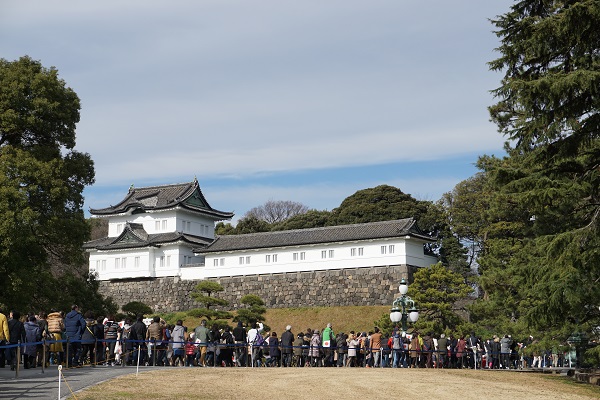 When he and his family came out to the balcony, we expected shouts of joy, applause and the usual cheering of crowds but people only waved their flags up high and smiled! Again, there were no pushing or pulling. Order and respect: this was the overall behavior of all who were there, ourselves included. 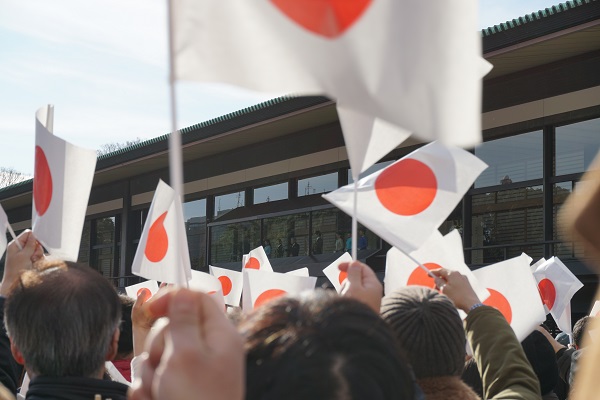 Akihito, the Emperor of Japan and his family

He gave a short speech (we certaintly didn’t understand a word he said) during which there was total silence. Then he would pause, and the crowd would wave the flags again. How peaceful and dramatically civilized, the perfect way to say goodbye to this great country. 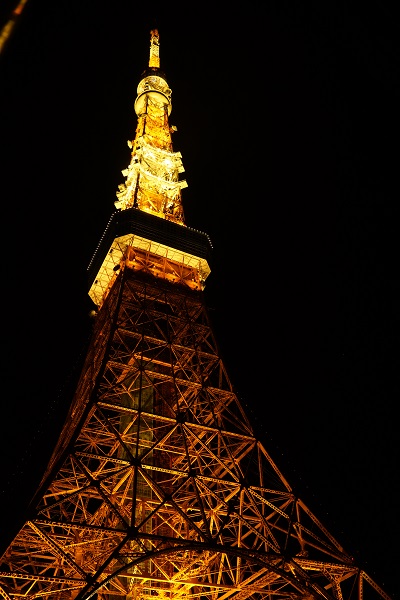 My goal was to summarize our visit to this city, and I tried hard not to leave anything out. However, no words can accurately describe this city and all the joy and wonder it gave us during our visit. It is special in every single way, and I repeat, one would need weeks and weeks if not years to fully live it. Tokyo is indeed the city of cities, and I’m afraid no other place in the world will be able to surpass it. Tokyo is my city, and I think my husband’s too.